This listing is for two rings, Moissanite leaf and twig solitaire with a matching twig band with a single leaf as shown. These rings are shown in two tone gold.


About the stone:
Round Forever One™ Moissanite: 6.5mm
(1ct diamond equivalent)
Moissanite Certificate of Authenticity included

ABOUT MOISSANITE
Charles & Colvard is the original creator of moissanite. The process is lengthy, complicated and expensive, which limits the output—it takes two to three months for the creation of a single gem. Charles & Colvard’s manufacturing process and years of expertise in creating the gemstone. 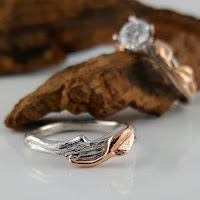 To learn more about the Moissanite, please go to: https://www.charlesandcolvard.com/moissanite-faq/
Posted by Dawn Vertrees Jewelry Designer at Thursday, February 01, 2018 No comments:

This ring was hand sculpted by Dawn using the lost wax method. I created a twig bridal set with a branch texture as well as polished vines.

This listing is for two rings, Moissanite twig solitaire with a matching twig band as shown. These rings are shown in solid 14 carat yellow gold. The rings also come with a certificate for the moissanite stone from Charles & Colvard.

About the stone:
Round Forever One™ Moissanite: 6.5mm (1ct diamond equivalent)
Moissanite Certificate of Authenticity included

Finish:
Outside: Branch Texture
Inside: Lightly Polished on the outside, inside polished.
Options: 14k and 18k

My Rings are made-to-order. Please allow 3-4 weeks to ship. If you need it sooner, please convo me the time frame that you need the branch ring.
Click here for additional information.
The ring arrives in a Black Velvet Ring Box.
Shipping: USPS 2-3 Day Priority Mail and USPS 6-10 Day Priority International Mail

Four Twigs, hand sculpted with a textured bezel nestled between the twigs.
The wedding band has two branches coming together and worn close to the heart.

***Note: Additional Gemstones and Diamonds are available, please send me a convo for prices.

About the Moissanite Diamond:

Moissanite, also known as silicon carbide, is a gemstone unlike any other. With more brilliance and fire than diamond, this stone has been a source of intense interest ever since its discovery more than a century ago. Moissanite dances with sparkles of light that draw the eye and delight the senses. Its unique internal beauty lends a captivating allure to jewelry, making a magnificent statement at a fraction of the cost of other gemstones. But only you know what you paid - envious passers-by see only a grand statement of opulence.

Today’s alluring moissanite gemstones are the end result of a 110 year old geological discovery. Moissanite was first discovered in 1893 by the Nobel Prize-winning French chemist Dr. Henri Moissan at the site of a massive meteorite strike in Arizona. The tiny particles he unearthed were initially mistaken for diamond due to their hardness and brilliant reflectiveness, but after painstaking testing, were identified as naturally-occurring silicon carbide. This intriguing new stone was named moissanite in his honor, and Moissan spent the rest of his life attempting to re-create this exceptional mineral, which is among the hardest materials on Earth.
Posted by Dawn Vertrees Jewelry Designer at Wednesday, May 11, 2016 No comments: