It's not an impressive title to have but once you understand the
process you will understand a bit better why I am called a lost wax artist
and I am so proud of it. 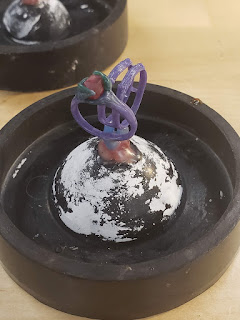 
The intricate lost wax process has a rich history in our world. Also known in French as cire perdue. It is a process that allows me to hand sculpt a wax model and cast it into a unique piece of jewelry. Each cast piece is solid silver, gold or platinum once my wax model is melted out of the investment. Investment is a finer type of plaster used by jewelers and is poured around my wax model. Once the investment is dried and then heated, my wax models disappears or known as being burned out and is replaced with melted gold.

My leaf model piece above is a one-of-a-kind hand sculpted wax model that will be cast in 14k gold. Each wax model is hand sculpted to fit our rough uncut diamonds or our hand cut gemstones. We do not mass produce our jewelry, in fact because they are hand sculpted, we choose to only cast a few at a time. 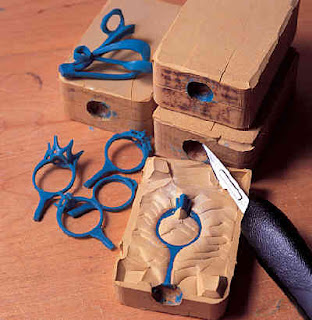 I have tried many different mediums, such as clay, ArtClay, etc.. until 16 years ago, I found jewelers wax which allowed me to get details I was wanting in each piece. With different tools I was able to give my leaves, twig and vines the look I was wanting.

Once in a while I will make a rubber or silicone two-piece mold on some of my pieces which may take up to a week to create an original piece. This is needed to keep the cost down for my customers because creating original works take many hours and some clients need their rings much faster than I can sculpt them but I still insist, to this day to modify each wax model to fit my customers needs. I can also modify the wax model to make it into another unique one-of-a-kind piece.

The History: The oldest known example of this technique is a 6,000-year old amulet from Indus valley civilization. Other examples from somewhat later periods are from Mesopotamia in the third millennium B.C. and the objects discovered in the Cave of the Treasure (Nahal Mishmar) hoard in southern Israel, and which belong to the Chalcolithic period (4500–3500 BC). Conservative estimates of age from carbon-14 dating date the items to c. 3700 BC, making them more than 5,700 years old. Lost-wax casting was widespread in Europe until the 18th century, when a piece-molding process came to predominate.