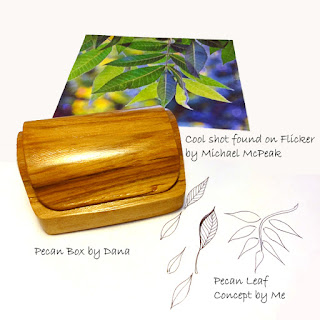 I picked up this cute little box while at Andre Christine's Gallery in Mooresville, NC
The artist who made the little Pecan Box is Dana Gingras.
Dana has beautiful hand carved boxes. Each box has so much thought carved into each one, it's as though while looking at the wood in it's natural state he can see the box within the wood and then he skillfully removes the box by carving it out.
I've added his impressive Bio below, but one sentence described his work beautifully... "His goal is to create something new and visually stimulating, yet still retain the natural dignity of material."

About this little box...

...Now, although I could have chosen one of his bigger boxes, like the one with the actual knot hole in the lid, or the box with the curvy wood grain that ran through the lid into the box which was so cool...but just in case I couldn't continue his art...I choose one of Dana's simpler pecan boxes which had beautiful flowing wood grain lines. I wanted to take this little box and continue the story by adding flowing pecan leaves.
My Leaf Choice 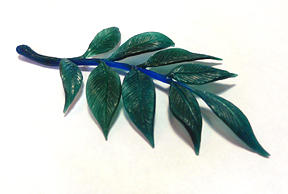 I'm a realist so my brain won't go in another direction and thanks to Michael McPeak, an awesome photographer on Flicker, I don't have to hunt down a pecan tree. 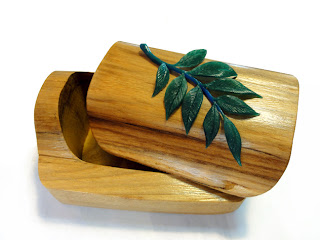 Not completed yet but I will be excited to show Dana our Pecan Box. I'm in the process of casting Silver so more than likely it will go silver with an antique finish.


Dana's Bio
Dana Gingras grew up surrounded by nature at the foothills of the Berkshires in Northwest Connecticut. After traveling extensively throughout Europe and the states he received his degree from The University of Connecticut. Continuing his education he spent the next four years apprenticing with noted glass and steel sculptor Larry Livolsi. Ever since he has maintained a studio focusing on large-scale work and custom interior pieces. His primary mediums are glass, metal, and wood. His work comes from the process of understanding these materials, their intrinsic properties, and inherent beauty. He currently resides in Mooresville, NC
“My goal is to create something new and visually stimulating, yet still retain the natural dignity of material”.
Posted by Dawn Vertrees Jewelry Designer at Wednesday, April 04, 2012